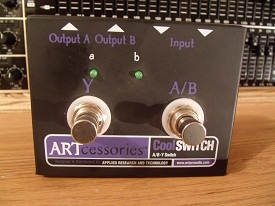 I happened upon this switch while trying to find something to switch from one EQ setting to another. I have a stereo EQ, but I use it for my guitar rather than vocal. When I wanted to switch them, it was a pain in the Hoo-Haa. So I wanted to find a switch that didn’t break the bank.

When I came upon the Art Cool Switch, the thing that really caught my eye was the fact that it also allows a Y-connection as well as the ability to reverse the direction. What I mean is I can hook two guitars into one amp or two amps into one guitar. I thought that it would perhaps have other applications, and I was right! 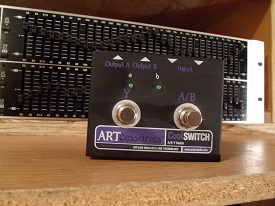 The advertised features are as follows:

When I received the Cool Switch, I took it out of the package and within five (5) minutes it was up and running. I could have just plugged it in and be using it within a minute without reading a thing except I had to install the battery. The compartment for the battery takes a screwdriver (one screw), and that’s what took so long. I personally didn’t like the way that the compartment opens and it is a snug fit which makes changing batteries on the fly while on stage a little time consuming. I have a couple of thoughts on that which I’ll discuss a little later. 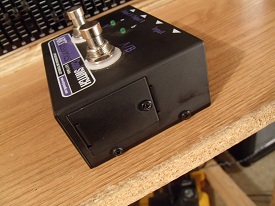 The switch worked fantastic for what I wanted it for with the added bonus of being able to “Y” the connections so that I could use both EQs at the same time which gives some strange effects depending on the setting.

This switch is built like a tank. It is all metal construction with the switches mounted on top, well, you can see the picture. Each switch has an LED light to let you know which (or both) circuits are being used. There is also a schematic on the back. 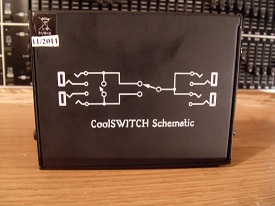 The unit is turned on by plugging an input in. Be sure to unplug any inputs when not in use or that 9-volt battery will be dead next time you use it.

Another added feature is that it has two inputs so that you can plug two things into it and both can use the A-B-Y circuitry. You can plug two guitars in or use one for a tuner and monitor your tuning as you play. However, be sure to unplug both inputs during breaks or it will drain the battery. 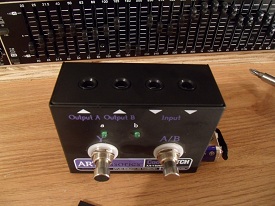 When I originally decided to post my review of this product, I read other reviews and found some conflicting information. Some said it worked great while others said it had a popping when switching or bleed-through from the other devices. I had to run my unit through the ringer to see what comes out.

I hooked things up every way I could think of. I used the Art Cool Switch to switch guitars, amps, my EQs as I described earlier, a guitar and bass, a keyboard and bass, a guitar and keyboard, two different mics, etc. You get the idea. I switched the A to B and used the “Y”. Then on the amp changes I tried two clean channels, two distortion channels, and one clean and one dirty. And this is what I found:

It works GREAT!!! No clicking, popping, or bleed-through. The Art Cool Switch works flawlessly and instantaneously. I even used it to play half a lead on one amp and the second half on another and you couldn’t tell I used a switch. I think that perhaps these guys got a defective switch and should send it back for another one. No matter what, every company has a dud every so often. No biggie, just let them know and get another one. I couldn’t be happier with mine! Oh well, yes I could be happier, but that is with the design. But the unit works great!

And since you asked, this would be my design changes (if I was the designer).

I use mine and it gives me options that I never had before. It also lets my imagination run wild thinking of what I can use it for next. =D This is a great product at a great price and I would recommend it to anyone.

I originally did a demonstration of this device on YouTube. If you want to watch that, it is below.

That concludes my review. I hope you found it informative.