In a lot of ways, rests are like notes. Actually, they are the counterpart of notes. In Lesson 2 we learned the values of notes. Rests have those same values, but here is how they differ; notes are the sounds in music and rests are the silences in music. Below are some examples of rests:

The half rest is silent for the equivalent time as two quarter notes or four eighth notes or one half note for that matter.

Note:
Notice how the half rest resembles a top hat? I use that as a way to remember which rest (the whole or half) I want to make. One is above the line and the other is below. Half sort of sounds like hat, so when I’m making a half note on sheet music, I use the symbol that looks like a hat.

The quarter rest looks kind of strange. You’ll need to practice writing that one. It takes up the same amount of space as a quarter note.

The eighth rest has a flag (as does the eighth note). And each time the note is split, it gains a flag (as do the notes of the same name).
Below are two charts showing notes and rests: 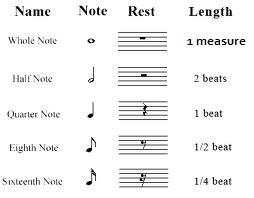 I would like to better explain how rests work by giving you an example. Below is a measure of time in 4/4 time signature. If you were to count the quarter notes out loud by counting them, one, two, three, four, it would be the notes ringing out in this piece of music. 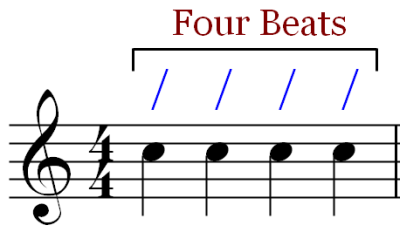 Now, in the measure below we have a quarter rest slipped in for one of the quarter notes.

Now when you count the four notes you will count number 3 to yourself and not say it out loud. It would be like, one, two,           , four. You still count the third beat, just count it silently to yourself. That’s how music is. It’s a lot of sounds and silences that accent each other.

This concludes Lesson 4. I hope you found it to be informative. You should review it and know it. Then go on to Lesson 5. I hope that you understand everything alright. If you have any questions, feel free to ask and I will try to explain it better.