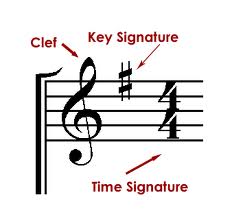 Key Signatures are defined by the accidentals that naturally occur in the Major Scale. When writing sheet music, it would become very cluttered to write a Flat or Sharp in front of every note that needed it, so a standard was set to write them at the beginning of every line or anyplace where the Key Signature changes. Below is a list of Key Signatures. 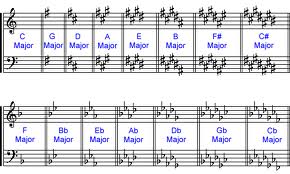 Once again, Key Signatures are defined by the accidentals that naturally occur in the Major Scale (or Minor Scale which we will address further in the lesson). To help you see this, let’s look at the C Major Scale. It consists of the following notes: 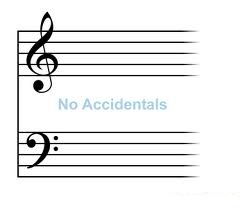 If you recall in Lesson 7, we discussed the Major Scale. And now that you know the Major scale, you also know the Key Signature.

There are tricks to it and we will discuss that (since you already know what is in each Key Signature). 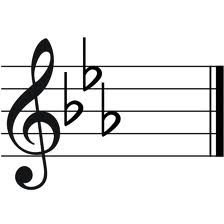 You are probably thinking, “Well how did you know it was Eb?” There is a trick to that as well. But before I can teach you that, you need to know how things occur. Flats (as well as Sharps) occur in a certain order every time. Examine this sequence of letters: 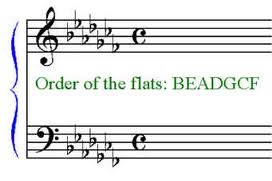 Now that you know that, Sharps also occur in a specific order. They are in the exact order of the Flats, but backwards. They occur as follows:

Below is a list of Key Signatures and their Relative Minors. 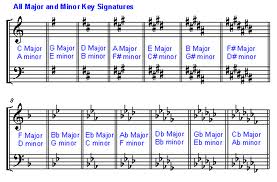 Most of the time when the Key Signature changes in a song, they add or subtract a Sharp or Flat. And theoretically a song could include every Key Signature by adding or subtracting all the way through the list until you come back to the original Key. To do this, you would have to link them together. Well that’s been done for you already. It is called “The Circle of Fifths”. Below is this Circle of Fifths. 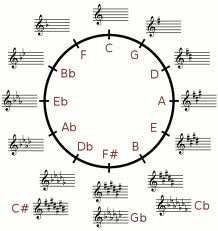 It is called the Circle of Fifths because each succession is the fifth note of the previous one.

Below is the Circle of Fifths with the Relative Minors included. 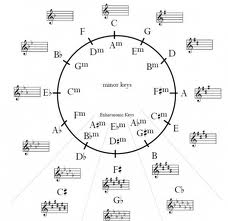 This concludes Lesson 9. I hope you found it to be informative. You should review it and know it. Then go on to Lesson 10. I hope that you understand everything alright. If you have any questions, feel free to ask and I will try to explain it better.

Notes and Their Values