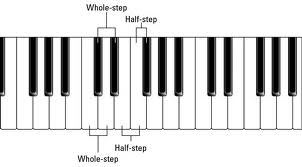 So if we write out an octave of notes from “C” to “C”, it would look like this:

Here is an example of C Major on a musical staff and on the piano keys: 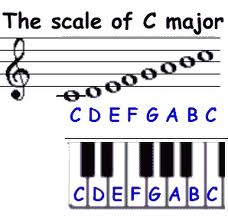 Notice that the Key of “C” on the piano uses only the white keys. That’s something to remember.

Now let’s look at another key. This time I want to use the key of “G”. If you span one octave from G to G it looks like this:

Armed with this information you can build any Major Scale, just follow the formula of Whole, Whole, half, Whole, Whole, Whole, half. It will always start and end on the same note and there will be eight notes in the scale (hence the word OCTAVE). You should practice this a few times till it becomes easy. Below are a few more examples, but you can figure them out on your own now. You don’t need me. You know how to do it yourself now.

This concludes Lesson 7. I hope you found it to be informative. You should review it and know it. Then go on to Lesson 8. I hope that you understand everything alright. If you have any questions, feel free to ask and I will try to explain it better.