This Lesson will explain what a dotted note and what a tied note is. Above is an example of each. Both of these examples in music would sound the same. In fact, you could just put an equals sign in between them. So, let’s do that and later on in the lesson, we’ll get back to that.

A dotted note and a tied note is just a way to alter the length of a sound. There are differences in them which we will explain. For now, just think of it as a longer lasting note. 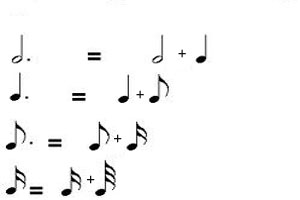 Tied notes are similar to dotted notes because it alters the length of a note. A tie is a way to make the note ring an additional length of time. Sometimes (like the example above) it is used to make the note ring beyond the end of the measure. Notes aren’t normally tied together within a measure unless the pitch is being varied. In that case, they call the tied note a slur. As seen below, the note is a slur because the pitch changed.

This concludes Lesson 5. I hope you found it to be informative. You should review it and know it. Then go on to Lesson 6. I hope that you understand everything alright. If you have any questions, feel free to ask and I will try to explain it better.

Why Reading Music is So Important